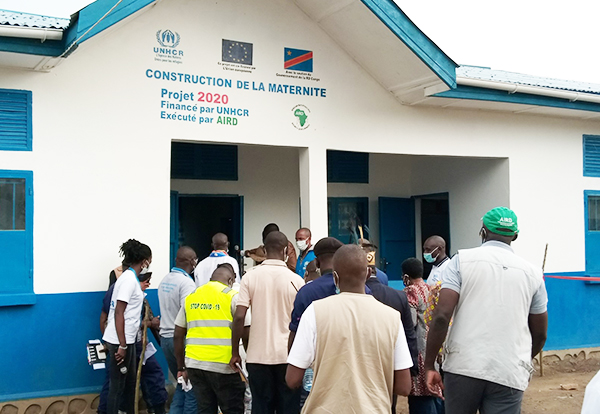 Since October 2015, Dungu territory in Haut-Uélé Province has been hosting successive waves of South Sudanese asylum seekers as a result of strong tensions between the Azandé and Dinka communities from the Western Equatoria State in South Sudan. The influx of asylum seekers in the DRC comes mainly from the localities of Ezo and Nzara, who then settle in the province of Haut-Uélé, in the territories of Dungu and Faradje. On arrival, asylum seekers were welcomed and placed with host families. This is the case for the localities of Dungu, Gangala, Masombo, Sugba, Bangalu. In places like Bitima, Masombo and Doruma, however, the local population is often overwhelmed by the massive influx of refugees with authorities having to regroup them in undeveloped spaces.

For the internally displaced, since the second half of December 2017, the territory of Djugu, in the province of Ituri has been plunged into a cycle of violence, a consequence of intercommunal tensions between the Lendu and Hema ethnic groups. From August 2018, new attacks were recorded between the attackers (unidentified armed men) and loyalist forces. This cumulative violence has caused the displacement of around 527,784 people in the province, including 254,841 in the territory of Djugu, (CMP Ituri figure, as of December 14, 2018). These atrocities continue to this day with repeated attacks by CODECO and CHINI KILIMA militias.

The UNHCR and AIRD Project in Ituri and Haut-Uélé addresses two pillars (pillars 1 and 4) depending on the beneficiaries.

The Project aims to provide logistical support through the establishment of 3 NFIs warehouses, 3 stations and garages in Aru, Aba and Dungu as part of the multisectoral assistance project in favor of 89,057 South Sudanese refugees, and to ensure the construction of 575 shelters and other infrastructure. This project also includes the relocation of 1,000 households of 5,000 people to Bélé, in several phases, including refugees and asylum seekers living in areas of Dungu Territory and a number of refugees living in the Meri site in territory of Faradje which has largely exceeded its capacity.

The objective of this project is to provide efficient logistical support to protection and assistance operations to the 929,821 internally displaced persons and returnees in Ituri province, and also in particular through the opening of a logistical base in the city of Bunia (Ituri) in order to meet the logistical needs of UNHCR and its partners operating in this area. It is in this context that a warehouse has been opened for the storage of NFIs and a fuel station and garage for the maintenance of the fleet.

Despite difficulties linked to the Covid 19 pandemic, insecurity, the lack of basic infrastructure, roads, banking structures, etc., the following results have been obtained: