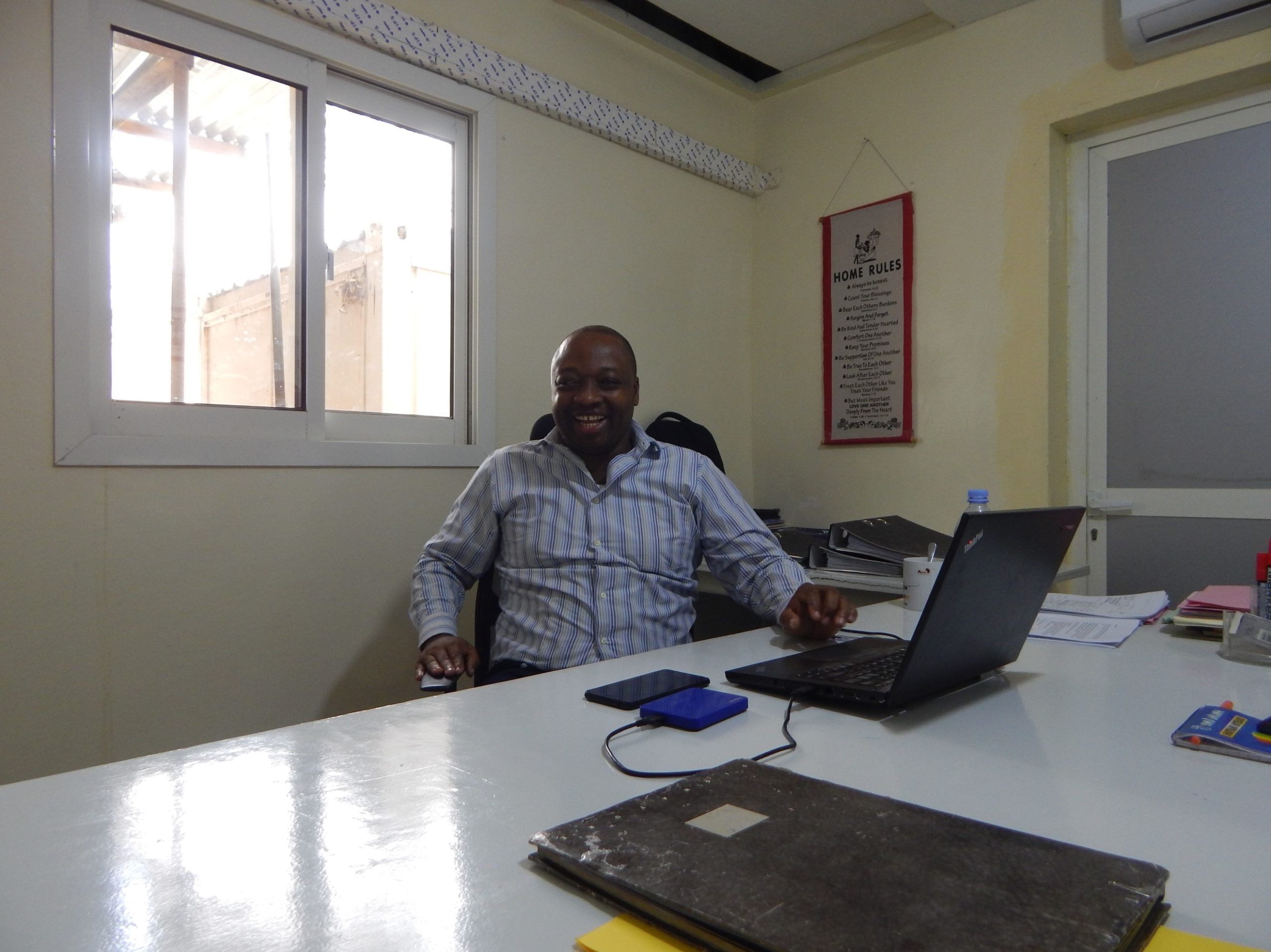 Emmanuel Nyuma is the Finance and Administration Manager at the AIRD Chad program. He is a wonderfully efficient and intelligent man with a quick smile that belies the incredible circumstances he has had to overcome to get to where he is now. Emmanuel was once a refugee, and his story is one of resilience, hope, ambition and luck.

Emmanuel is the first born of six, born in Sierra Leone in a town about 45 minutes from the border with Liberia and Guinea. In 1991, at the age of sixteen in form 3, his whole world was turned upside down one day when rebels from Liberia ran into his home town. He recalls seeing soldiers run across his school compound, with the rebels not far behind. That was to be the end of his time at the school. He remembers a time before this, about a year before, when as students they concernedly asked their teacher about the growing insecurity across the border. Their teacher informed them that these were false stories and nothing would come of it. On that fateful day when the rebels overran their town and school, Emmanuel and five other boys were caught and threatened with death if did not join the rebels. It was in fact a cruel game as the boys were taken individually behind a building where the rebels would pretend to shoot them. When it was Emmanuel’s turn, he said he would rather die where he was than be shot behind the building. It was at this time that one of the rebels recognized Emmanuel as being the son of his former headmaster and it was revealed that they were not going to be shot, but must still join the rebels. That night, Emmanuel managed to escape the rebels and fled across the border into nearby Guinea. And thus his status as a refugee began.

When Emmanuel crossed into the refugee camps in Guinea, UNHCR and IRC were already there to receive fleeing Sierra Leoneans. His family had already escaped into Guinea, and after several weeks he was relieved to locate his parents who were very worried for him. From this point on, they had to adapt to their new reality. Schooling was able to continue since the same teachers who taught students in Sierra Leone had also fled into the refugee camps. Their lessons began in the afternoons after the French schools had closed.

Following three years in the camp, and after he had completed writing the West African exams, an incredible opportunity came knocking. The International Rescue Committee (IRC) was initiating a program to sponsor refugees in an institute that would provide 18 months of vocational training. Including several subjects, the course would, very importantly, teach them French which would enable them to join French language universities in Guinea upon completion. Emmanuel applied and at the age of about 19 began studying French, Business Management, Secretarial studies and Computer Science- he was the only student to opt for all the subjects offered! Although this was a lucky break (Emmanuel and his fellow students were the very first cohort), it did not come completely free. In order to prove their commitment, the students were expected to pay for half of the tuition. Emmanuel worked on a construction bridge project to raise the money. He was often so broke he ate cassava for days on end to save money. He recollects once hanging all his clothes out to dry and finding them missing when he got back. He wept in despair. Later that day, after finding out what had happened to him, a fellow classmate offered him free meals from them on and convinced her partner to give Emmanuel money to buy new clothes. He has never forgotten this act of kindness.

Upon completion of his course, Emmanuel and 20 other refugees were given the chance to further their education at the University of Conakry. He opted to study Accounting and Management at the Institute of Computer Science and Management from 1997 to 2000. UNHCR provided for all their scholarship needs at this point. Following his graduation from the university, Emmanuel was able to find employment immediately and has since worked in finance, administration and grants roles at organisations such as IRC, Centre for Victims of Torture, German Agro Action, Care International, German International Cooperation, Plan International and World Hope International before joining AIRD as the Finance Manager in September 2019.

Emmanuel and the 20 refugees in the first cohort sponsored by IRC are still in touch to this day, and nearly every single one of them works in the same field as an expatriate. Emmanuel, as the first born in his family, took on the responsibility of caring for his siblings and paying for their school fees. Among them now is a Grants Management Specialist, a doctor, a linguistics graduate studying law and a public health graduate. The family has since moved back to Sierra Leone and are so close that they have chosen to live together, even as they start to have children of their own. Emmanuel himself has four children, three of whom he fathered while still a teenager in the refugee camps. His oldest is 20 years old and studying at university while his last born is six.

Emmanuel is grateful to be where he is today. Not everyone made it out of the refugee camps. He is a true success story and proof of what the future can look like for a refugee child when opportunities are made available.