Violent conflict between government forces and rebel groups in the Central African Republic (CAR) continues to result in the displacement of hundreds of thousands of civilians into neighbouring countries and particularly Cameroon, the Democratic Republic of Congo and Chad. Even as many flee across the borders, there are still over 700,000 Internally Displaced Persons within the country as at 30 June 2021 (UNHCR report). All in all, over 1.5 million Central Africans have been forced to flee their homes, an estimated nearly one third of the total population of country. 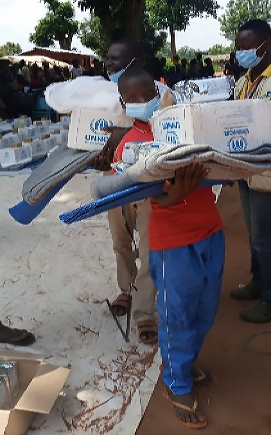 Internally displaced populations within CAR find themselves in dire situations where the most basic of items are difficult to come by.

When these groups find themselves in protected areas, the need for items to rebuild their lives becomes urgent and critical. Provision of various household items enables them to have the semblance of a decent life and gives them the dignity they need to move on.

In July 2021, in partnership with UNHCR and other agencies, AIRD in CAR aided displaced people at Site d’Elevage in Bambari town located in Ouaka prefecture in the southern region of the country, through the delivery of a variety of Non Food Items (NFIs). In addition to thousands of IDPs, there are also an estimated 211 Sudanese refugees in the area who require support.

The main needs in this area are for food, shelter and income generating sources. To facilitate an improved standard of living, the following items were distributed to the displaced people in the area:

It has become increasingly important to understand the urgent needs of the populations in these areas as one of the main challenges around delivery of Non Food Items is that they are often sold by the beneficiaries in order to purchase other items they deem more useful in the moment. It is for this reason that, in addition to delivery of critical Non Food Items, initiatives are being implemented by different partners that support those displaced to earn a living and supplement the items they have received. 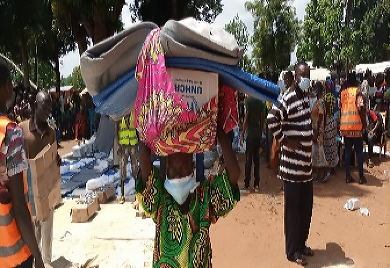 Through the provision of opportunities in jobs such as road construction and grass cutting, able bodied and eligible members of the community can earn incomes and might be less inclined to sell off the Non Food Items they and their households receive.

Shopping coupons of varying amounts depending on household size is another initiative that has recently been introduced to displaced people in this region to mitigate issues around the sale of NFIs.

AIRD remains committed to supporting the displaced people in this region through the provision of various services in order to restore a sense of hope and build a level of resilience in the short and long term.