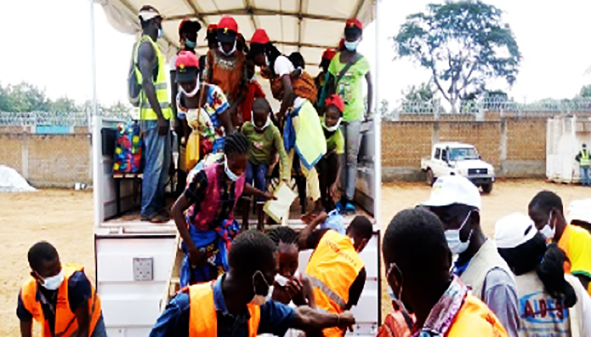 Above: Returnees disembarking in CAR after a long journey

The Central African Republic (CAR) has experienced much upheaval from insecurity and clashes over the past decade. Hundreds of thousands of its citizens have had to flee into neighbouring countries to escape post presidential election violence, particularly in 2013 and again in 2020. Hundreds of thousands more are displaced within the country’s borders. UNHCR estimates that as at September 2021, 684,718 refugees and asylum seekers were predominantly hosted in Cameroon, the DRC, the Republic of the Congo and Chad.

As is often the case, however, the promise of peace back home has many of those who sought refuge in neighbouring countries wishing to return. 6,500 refugees registered with UNHCR in the DRC expressed their interest in returning to CAR in 2020/2021.

In total, some 206,346 CAR refugees are estimated to be settled in various camps in the DRC.

AIRD as the logistics partner is in charge of facilitating the return of those wishing to make the journey home. These efforts are coordinated between AIRD in the DRC and CAR, as well as several other humanitarian implementing partners on the ground. The smooth cooperation and collaboration between partner agencies is absolutely paramount to ensure the entire process is as seamless as possible for a group of people who, even though hopeful of what awaits on their return, may still be apprehensive about their arrival back home.

Albeit faced by interruptions due to border closures resulting from the COVID 19 pandemic, repatriation was nonetheless able to proceed as the year progressed.

In November and December 2021 alone, AIRD supported with the movement of 3,465 refugees. Led by logistics officer, Barry Ibrahima Sory, the team facilitated the transportation of the returnees in nine (9) convoys. Most of the returnees began their journey from the Boyabu and Libenge camps in the South Ubangi province of the DRC.

From the DRC, returnees were flagged off by Congolese authorities, Central African authorities and UNHCR partners. Spirits were high on all sides as the journeys began, with the hope that bright futures awaited those making the brave decision to resettle in their country.

The journeys were not without their challenges. The very long distances to be covered over a tough terrain, exacerbated by extremely poor road networks in some parts, meant the convoys could not complete the trips in one day. A river crossing was also part of some of the trips, especially difficult as boats sometimes malfunction during passage and require on spot repair. 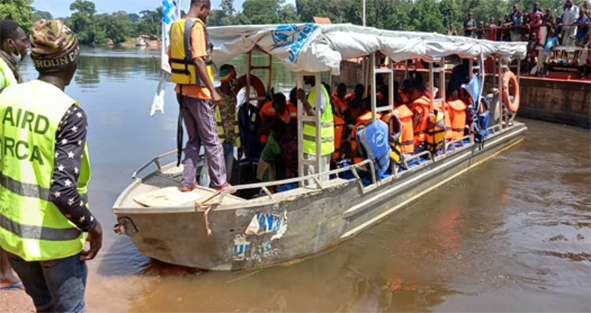 Logistical challenges: boats are required to cross the Ubangi river from the DRC to CAR

In addition to safe transportation of the returnees, on arrival at the Moungoumba transit centre, the AIRD team also ensured that they delivered the Non Food Items necessary for the different groups to restart their lives. The transit centre is located in south west CAR.

Furthermore, preparation of the Moungoumba transit centre for the comfortable stay of returnees involved much planning mainly around WASH facilities, electricity, garbage disposal and protection issues. Significant gaps in the availability of water for use by returnees meant that water handlers had to be recruited by AIRD to manually carry tens of thousands of litres of water during the month long repatriation process that begun on 11th November and concluded on 16th December. 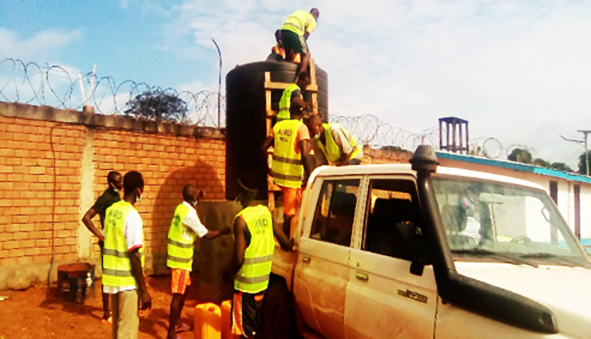 Spirits were generally high on arrival for each returning group at Moungoumba during this period as they were received by local authorities and UNHCR alongside other partners. Returnees were typically dispatched the following day to different settlement sites.

If generally peaceful conditions prevail in the Central African Republic, more refugees will choose to return to the country they love in spite of the tough conditions and challenges they will face in rebuilding their lives. AIRD, in collaboration with other partners, will continue to be there to support them through these journeys and provide the services that will make the transition home as smooth as possible.