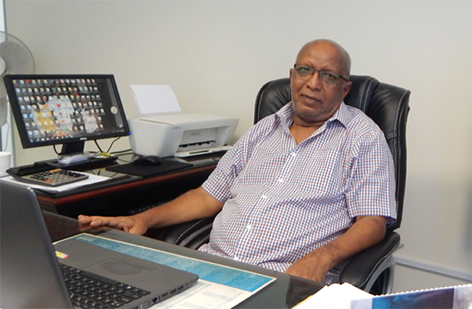 It was with profound sadness that the AIRD family announced the passing its CEO and co-founder Mathias Temesgen Daniel on the 16th of October, 2021.

Mathias had been diagnosed with COVID-19 in early September while on vacation in his home country of Ethiopia, and in spite of improvements in his state over that time, he unexpectedly succumbed to the disease on the morning of 16th October.

Mathias had played the role of CEO at AIRD since its inception 15 years ago in 2006. Together with two other founding partners (Mr Menna Tewahade and Mr. Gizaw Shibru), Mathias brought to the life the dream of an African initiated organisation that would meet the needs of refugees and displaced persons on the continent.

At the time of Mathias’ passing, AIRD had grown to work in 11 African countries (currently operating in 10).

With over 3 previous decades of experience in the areas of humanitarian aid and disaster management, Mathias’ wisdom and leadership played an enormous role in guiding AIRD to where it stands now – a reputable African agency that enables the compassionate movement of those displaced by natural or man-made disasters to safety, while providing them and their host communities with opportunities to build their lives and thrive for the long term.

Mathias will be remembered fondly by colleagues for his exuberant nature and very close attention to detail.

He is survived by his wife and three children. Our heartfelt condolences go to them during this difficult time. We will miss Mathias deeply.