Beneficiaries of a resilience project in Eastern Chad on its impact

Beneficiaries of a resilience project in Eastern Chad on its impact

Since 2003, conflicts in the sub-region (Darfur and the Central African Republic) have resulted in a large number of refugees fleeing into Chad. In the majority of cases, and particularly in the eastern region where most of the camps are located, refugees can represent up to a third of the overall population. This situation makes it easier to coordinate the delivery of humanitarian aid but often limits the possibilities for self-sufficiency of many refugee households. In the face of reduced funding for humanitarian situations, it is increasingly important to implement solutions that are more empowering and sustainable for communities and their environments.

With funding from the World Food Program (WFP), AIRD supported vulnerable host and refugee communities in the establishment of infrastructure to build their resilience in the face of food insecurity that is a major challenge in this region. This involved undertaking natural resource management activities such as; construction of spreading weirs (barriers/walls) and building of improved wells. Further assistance through Cash Transfers and Non-Food Items (work materials) to communities ensured activities were implemented by the communities through the provision of unskilled labour.

The project has changed lives in the Guereda region- empowering many families, and particularly women, in its implementation. The beneficiaries of this project included 1,196 households from both refugee communities (50%) and the host population (50%) around Ouadi Ouba and the Natika valley. Also included were groups and associations of agro-pastoralists.

Below we hear from just some of the beneficiaries of this project to understand the impact this project has had on their lives: 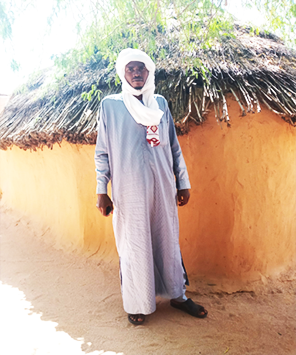 I come from Sudan and more precisely from the village of Fachir. Like the majority or even all of the Sudanese refugees in the Milé Camp, it was the war and the relentless insecurity in our country that drove me to flee to Chad. I only arrived here in Chad in 2010, so I spent 11 years in Milé camp.

I was among the first to be involved from the start. I am the Youth President of the Mile camp and a member of the office for peaceful cohabitation with the local community. The first day when the AIRD Office Manager came to present this project to us, it was I who welcomed him. This is to say that I did all the awareness raising with them. This project has enabled us to get out of the precariousness caused above all by the suspension of WFP food distributions.

I have been involved in this project since the inception. But, for the activities themselves, I worked as Supervisor in the construction of some of the infrastructure. This AIRD Resilience project has really changed our lives. We benefited from the Cash for Work distribution which allowed us to do a small saving to buy clothes for the children and especially food. Being a member of the committee for peaceful cohabitation, this project has also enabled indigenous people and refugees to work together. We encourage the continuity of the activities of the AIRD Resilience project. MOUBARAK , husband and the father of five

I come from Kebkebé village in Sudan, I arrived in Chad as a refugee in Milé camp in 2004. I fled the war and more specifically the Darfur War.

I heard about this project through my husband who attended the sensitization done by the NGOs. I worked in this project as a Trainer as part of the construction of improved stoves in Milé camp. For the impact, I received a lot of cash for work and it allowed me to achieve a lot. For example, this money distributed as part of AIRD’s resilience activities allowed us to save for field work and children’s education.FAïGA, wife and mother of eight (8) 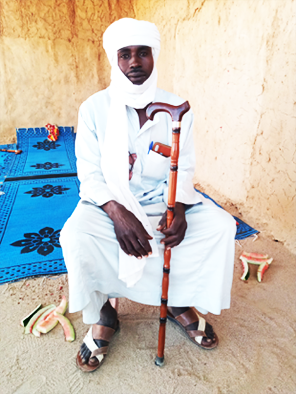 I am an Indigenous person, from the village of Natika. Before this project, we lived in a vulnerable situation, with no activity apart from seasonal harvests. Our daily hobby was playing chess- luckily this project has taken us out of this mess. I heard about this project when the head of AIRD (Country Director) came to meet us in Natika. He told us about the benefits of this project for our community and how they want to achieve this project with everyone’s support. I worked as a Supervisor in Natika through stone bund activities. Afterwards, I was transferred to the Koursigué spreading threshold activities where I continued to work in crushing and rubble collection.

Seriously, this project saved me, I was in a situation of poverty and this money received allowed me to buy several materials, children’s school books and especially the purchase of cattle. We dare to believe that this AIRD project will continue! MAHAMAT, husband and father of eight (8) 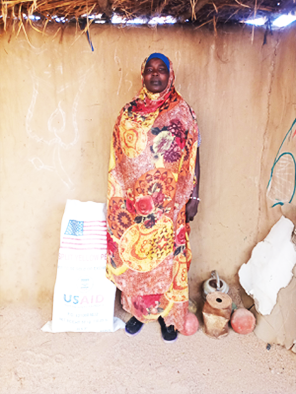 I am from Amgamara village in Sudan. I arrived in Chad as a refugee in 2004, the year the war started in Darfur. As for our life before this project, I can say it was a bit complicated, we were virtually unassisted, compared to previous years when WFP distributed food to us. I was involved from the start of the activities in the construction of the weirs. I worked as a laborer collecting rubble and carrying water. For my part, I feel the impact of this project in my daily life. The distribution money that I received allowed me to settle a lot of situations. I was able to start trading with this money. It should also be noted that the construction of stone bunds had a positive impact on many families who were lucky enough to benefit from these assets in their fields. I would love to have some in my field. FATIMÉ, wife and mother of six (6).