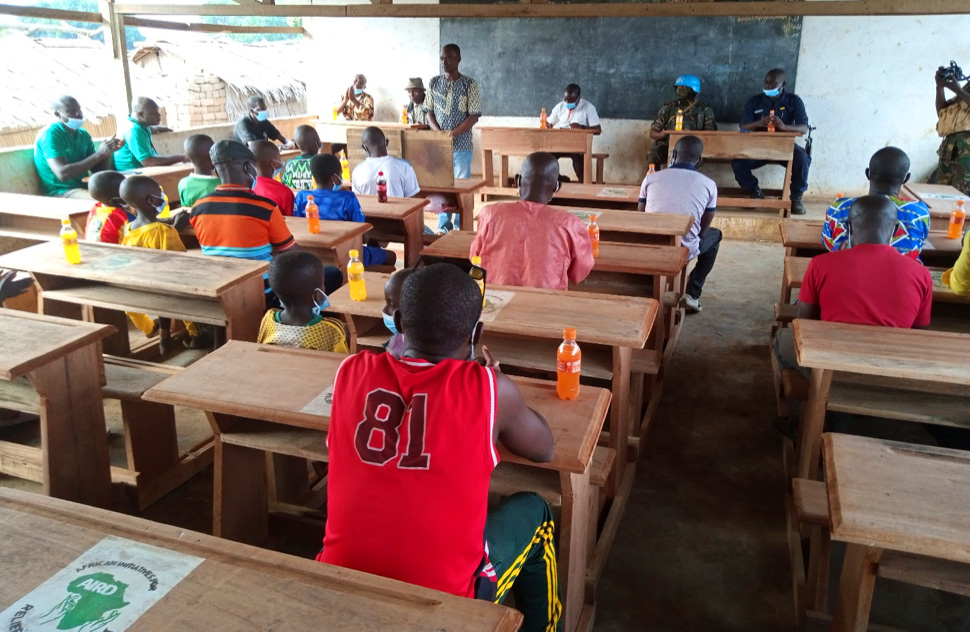 In Amada-Gaza, a sub prefecture of Mambere-Kadeï in the Central African Republic, conflicts among different communities resulted in wars that have destabilised the living conditions of an estimated 27,000 inhabitants spread across 34 villages. As is the case in areas facing insecurity and instability, important services such as health and education are halted or slowed down significantly.

In the case of Amada-Gaza, one vulnerable group seriously affected is the students whose education was interrupted. Of the 15 schools available to serve the learners in the sub-prefecture, only 11 are currently functional. Many of these are in various states of disrepair and can barely accommodate the thousands of children that now want to return to their studies.

For the academic year 2021-2022, it is estimated that 2,580 children, including approximately 238 displaced children in Gbambia, Ngambi and Amada-Gaza are now enrolled in the 11 functional schools. The majority of these schools do not have adequate furniture in the way of desks and chairs, and the furniture that is available is often old and broken. Teaching materials are scarce and qualified teachers are few.

OCHA in Bouar reached out to various humanitarian actors to respond to this crisis facing schools in the Mambere-Kadeï prefecture. AIRD in CAR responded to this call by offering assistance to some of the schools in the area and supplied 140 table-benches to schools in Gbambia (70), Ngambi (40), and Amada-Gaza (30).

Jules, a student at Gbambia Mixed School shares the difference the new furniture has made for him and his classmates months after they were delivered.

“I used to be scared. At the beginning of the academic year I would get up early in the morning to go to school and be among the first students in class to be able to find available seats in class. Otherwise, late comers attending classes had to stand or sit on tree branches placed on stones to follow the lessons.
I call upon my colleagues who dropped out school complaining about the challenging learning conditions to resume classes because at the moment there are enough seats for those who could not find where to sit in the classroom during lessons. The conditions have improved for students and we can now learn in decent conditions.”

Above: Before and after photos of the classrooms before the new furniture was received

There is still an incredible amount of support that the schools in Amada-Gaza and surrounding areas require if they are to serve the learners well. Every bit of help that makes it easier for one student to attend classes makes a world of difference. Even as the AIRD team in CAR supports in other activities to lift displaced persons, it is recognised that smaller interventions over time can help enhance stability for the communities through their children who are able to receive decent education and improve their chances for a better future.